On the way back from the Andrew Wyeth exhibit at the Brandywine River Museum, I stopped for a really quick sketch of the lovely Brandywine Valley as seen on a partly cloudy day! The stunning sketches and paintings of Wyeth were still swirling in my head, and I was in the mood for a landscape. Although Wyeth used a much subdued palette for his landscapes, And subjects, I was in the mood for colors with a punch! What I wanted to capture was really the atmosphere rather than recreate the actual scene. To that effect I condensed the perspective a bit and tried to convey the mood that it represented to me as the sun sulked in and out of the stormy clouds casting a shadow sometimes and then taking it away… 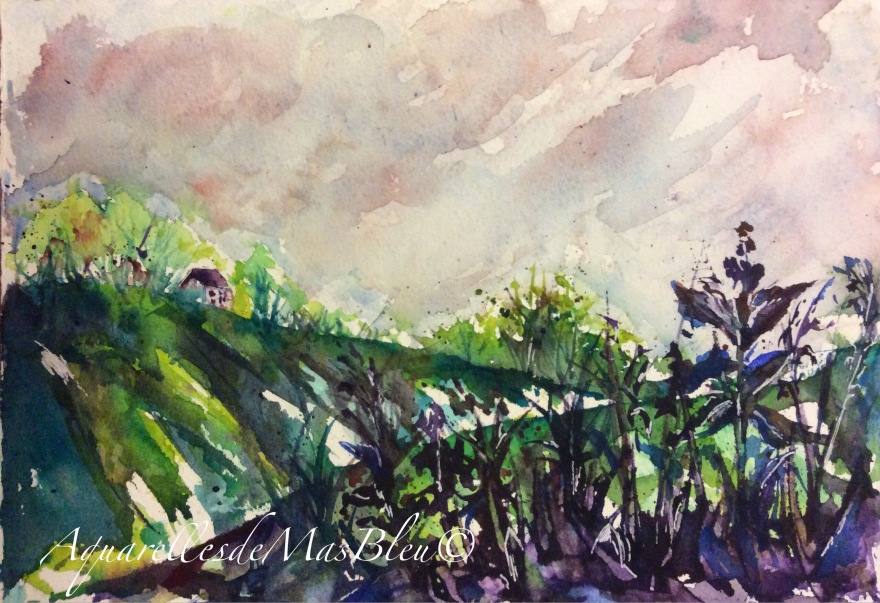 I love to go for long walks whenever I can and I always bring my sketchbook along for that quick capture of a scene or a mood that strikes without warning. Walking in the meadows at Longwood Gardens after a snowfall takes on a whole new meaning. The blue and purple hues of the distant wintry horizon, the soft fluffs of snow clinging to the seed heads, the dry grass that once stood upright now bent over weighed down by the icy snow clumps, the melting snow frozen in dripping icicles on the twigs and shrubs that catch the sunlight and scatter it into flashes of rainbow colors, the crunch of the frozen snow beneath you feet, and that smell of the frigid air that surrounds you, all make for an atmospheric experience that words fail to describe in full. Here’s my pictorial description in purples…

and here’s another one in moody blues…

Everywhere you look out side, everything is covered in white. Three days of snow and ice storms, three days of painting snowy wintery scenes, and I needed color in my life! My  blue orchids are blooming indoors, and on this cold winter day they bring such brightness and color to the indoors. At present these orchid and the winter jasmine outside my window are all that’s blooming around here. So I’ve been playing around with purples and blues. Here are some different version of blue orchids and my play with purples… 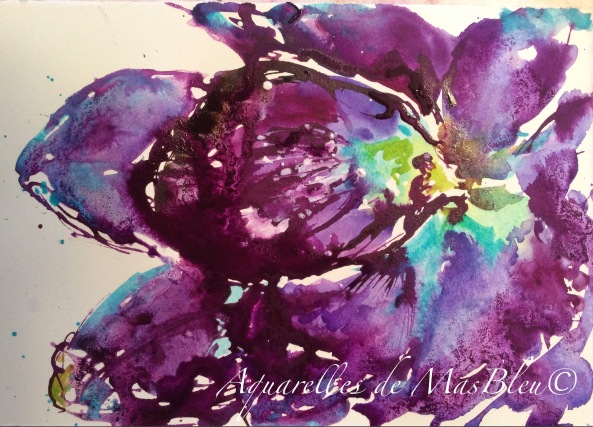 And then without the oranges… 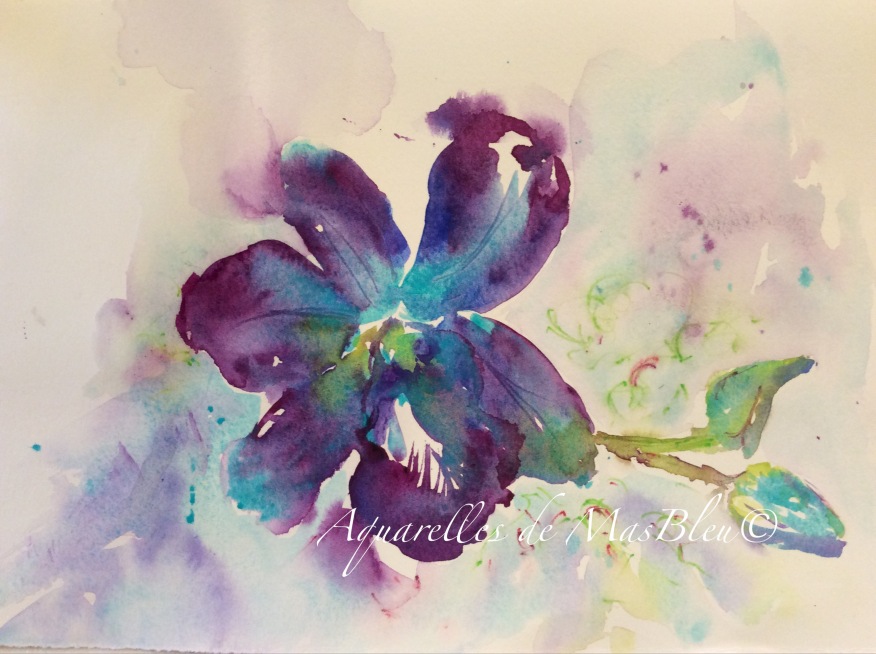 And now that I’ve got my color fix and used up a lot of my purples, I can go back to painting snow again! I’ll post my winter scenes in my next post.

Happy New Year to you all. Based on the Chinese calendar, 2017 is the year of the Fire Rooster. “The Chinese people say that this year people will be more polite and less stubborn, but they will have the tendency to complicate things.” Hmmmm, I wonder if this was written with anyone particular in mind!

“As they see it, the year 2017 is a year dominated by the orientation towards progress, honor and maximum integrity, people learning to temper their ardor.” Again, I’m wondering if would apply to the leaders of certain countries I have in mind…just saying!

Nevertheless, not to get too political here, I thought I’d honor the rooster today, the first day of 2017. Now, I love painting birds, but for reasons unclear to me, I’ve never really had an interest in roosters. I’ve seen them on farms and often enough while at a pumpkin or fall festival I’ve had a chance to see some quite gorgeous plumage on these birds, and yet I’ve never really sketched one. So today I got started on one, and it turned out alright…for a first try! 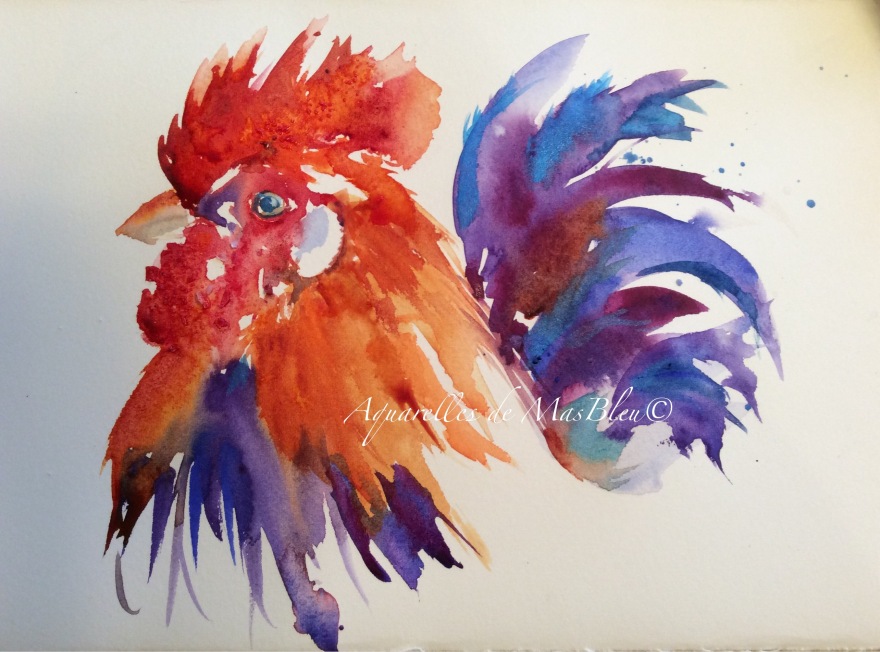 I did give it a second try, aiming for more texture…

Having stuck with the same color scheme the second time, although not intentional, I thought I’d go a bit quieter for the third try.

My favorite place to sketchwalk is in the meadows at Longwood gardens. Since the meadows expansion project, the trails and pathways now meander through the meadows and the views from each vantage point are spectacular any time of the year. My favorite view is from this one spot where I can see the Webb Farmhouse across the undulating landscape. I tend to be biased and sketch from this vantage point more often. Although there are other views that I’ve sketched, this one always gets my attention. In my last post I’d shown you its summer glory. Today’s post has the fall colors of the meadows. 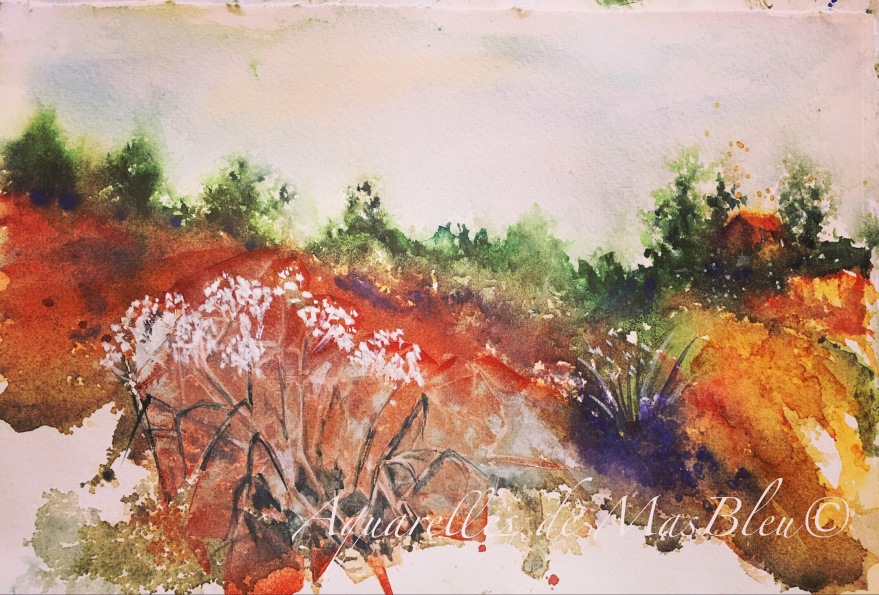 There is so much color in the fall with all the greens now darker and the seedheads and pods taking on various shades of browns and purples and grays. The skies in the fall have their own stories to tell in color too, but I kept the sky muted in this sketch, as I thought it would be too much and detract from the main theme. What do you think? Comments welcome.

I’m starting to sound like a broken record, but trying to create texture in watercolor has been a journey for me thus far… I’ve built up quite a stack of experimental washes, not always with a subject in mind, just allowing the paint to flow and seeing where it leads me, but always keeping in mine my aim to develop textures of all sorts in the making! Sometimes subjects emerge and I follow through and sometimes they’re just an abstract outcome. Below are just two of my stacks that will end up as bound sketchbooks. 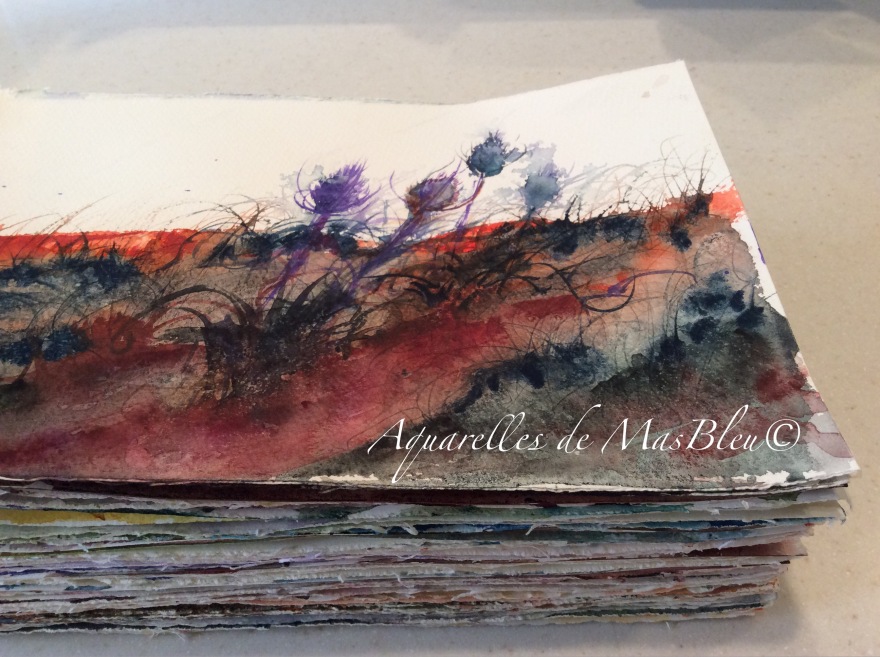 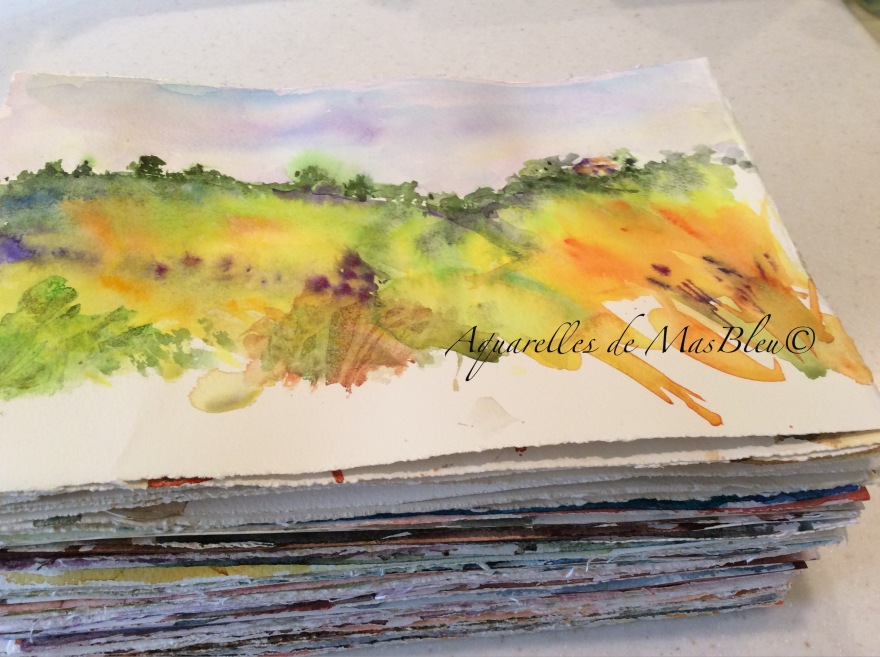 It has been such a satisfying experience that I’m still continuing with this process, but I thought I’d post a few of the final results too.

This is a view of the farm on the meadows at Longwood Gardens in summer. I used a quick 5 minute sketch I did while sketchwalking there in summmer as my reference for the above painting. Below is the 5 minute reference sketch I did while walking…quite a difference in textures between the two …don’t you think. 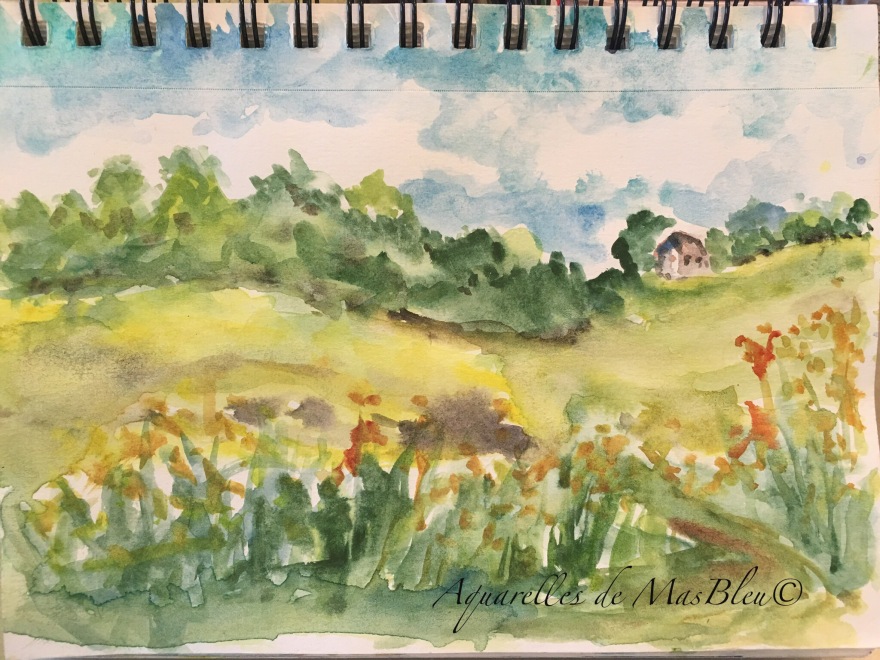 Everyday on my sketch walk all I see around me is texture – bleak rainy days, on cloudy days, and even on a sunny day. Here in the Pacific Northwest, come fall when the trees have lost all their leaves and the weather turns damp and rainy, the trees seem to come alive again, but this time the pale creamy green you see is mostly lichen. The lichen seem to get brighter and fuller and thrive in this moisture laden atmosphere. Everywhere you look tree trunks and limbs are laden with varieties of the stuff, different sizes, shapes and shades of green from bright greens to whitish pale greens. So sketching trees now isn’t about smooth trunks and limbs but lots and lots of texture to convey the appearance of the moss and lichen. Some are curly, some spongy, some even look like stag horns and some are feathery and long and dangle in strands, but they’re everywhere, even on the broken twigs and a limbs on the ground that manage to find their way home with me. This has inspired me to add more texture to my watercolors and I’ve been trying new ways (new for me) to do so. Here’s a quick view of my attempts so far.

A few treasures from my walk…leaf and lichen

And my impression of a lichen laden tree…

Still working on texture creation, so there’ll be more.