Early last spring, I saw a little wren at my bird feeder pecking away with all his might. About an hour later I noticed squirrels having a feast on the ground and the bird feeder was empty. I proceeded to take it down to fill it up again when I noticed a bunch of twigs inside, which I promptly cleared out and refilled with sunflower seeds. Later that afternoon, the same spectacle, there he was again pecking and spilling out the seeds. It then hit me, this little wren had just found himself some prime real estate and was not about to give it up. So, I gave in!

A few weeks later I was rewarded to the sound of five hungry chicks screeching inside the bird feeder. The wren had succeed in building his nest, finding a mate and successfully raising a brood! I never got to see the fledglings leave the nest though, as I was traveling most of the summer.

This year spring’s arrival brought back the wren, and his sweet song filled the air. And then it went silent. Sure enough there were six eggs in the nest and a few weeks later six little chicks. I was away a few days and I missed the fledglings again! Not to disappoint, the wrens have had a second brood of five eggs this year and with a camera setup I did get to take a few pictures without disturbing them. This past Sunday I got to steal a few minutes in between their feeding times to sketch them. And boy are these fellows hungry all the time!
They are quite a sight with their big bald heads and wide open mouths! Here’s my rendition of Baldies with Big Mouths! 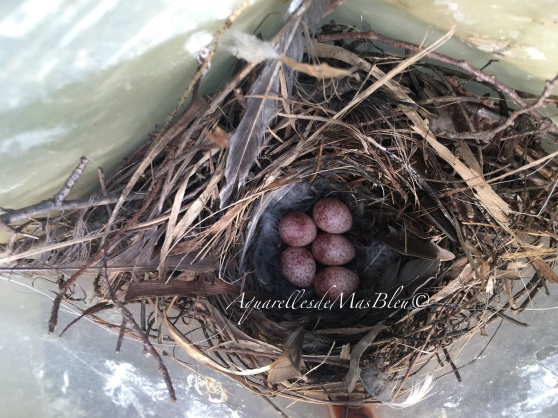